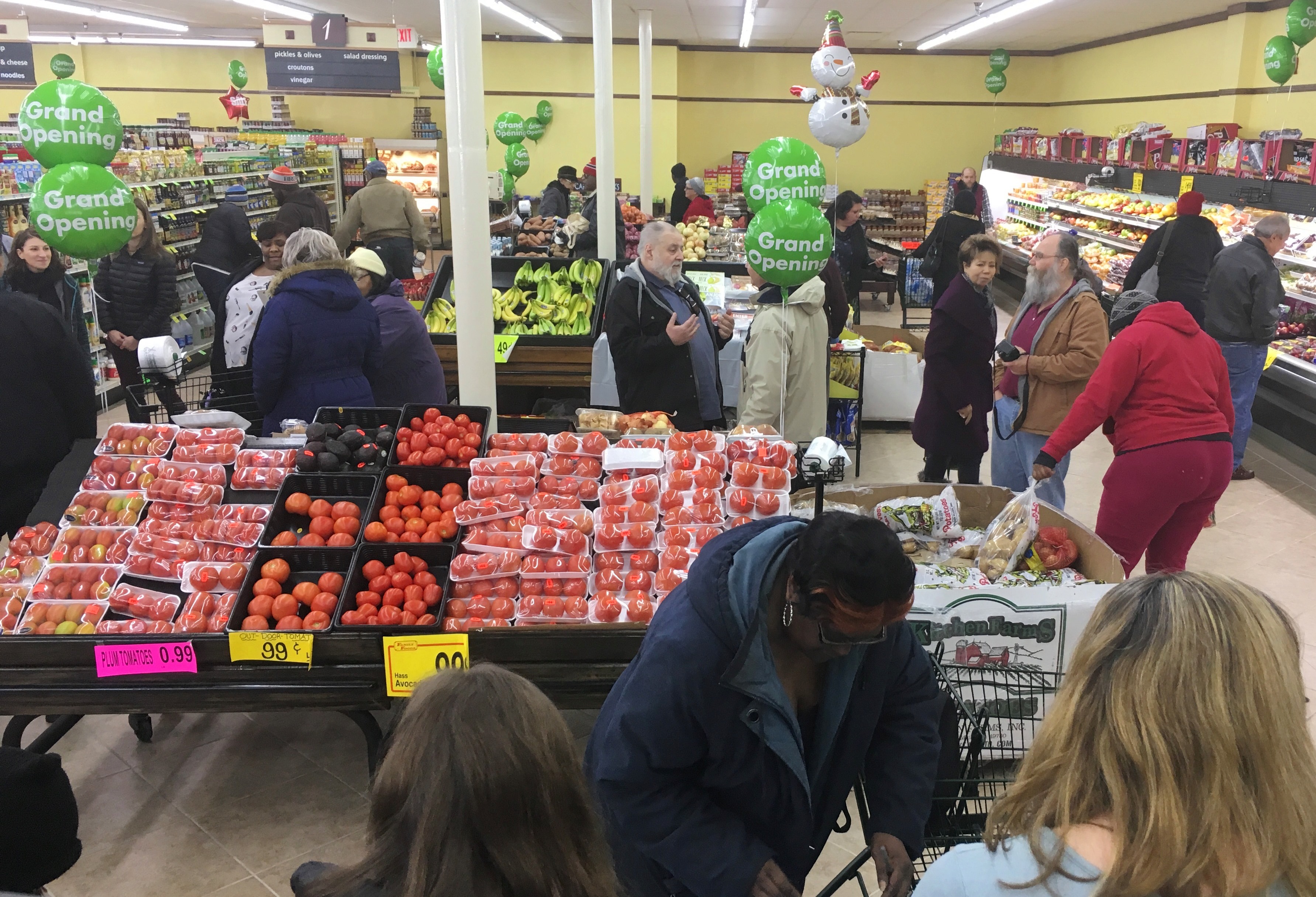 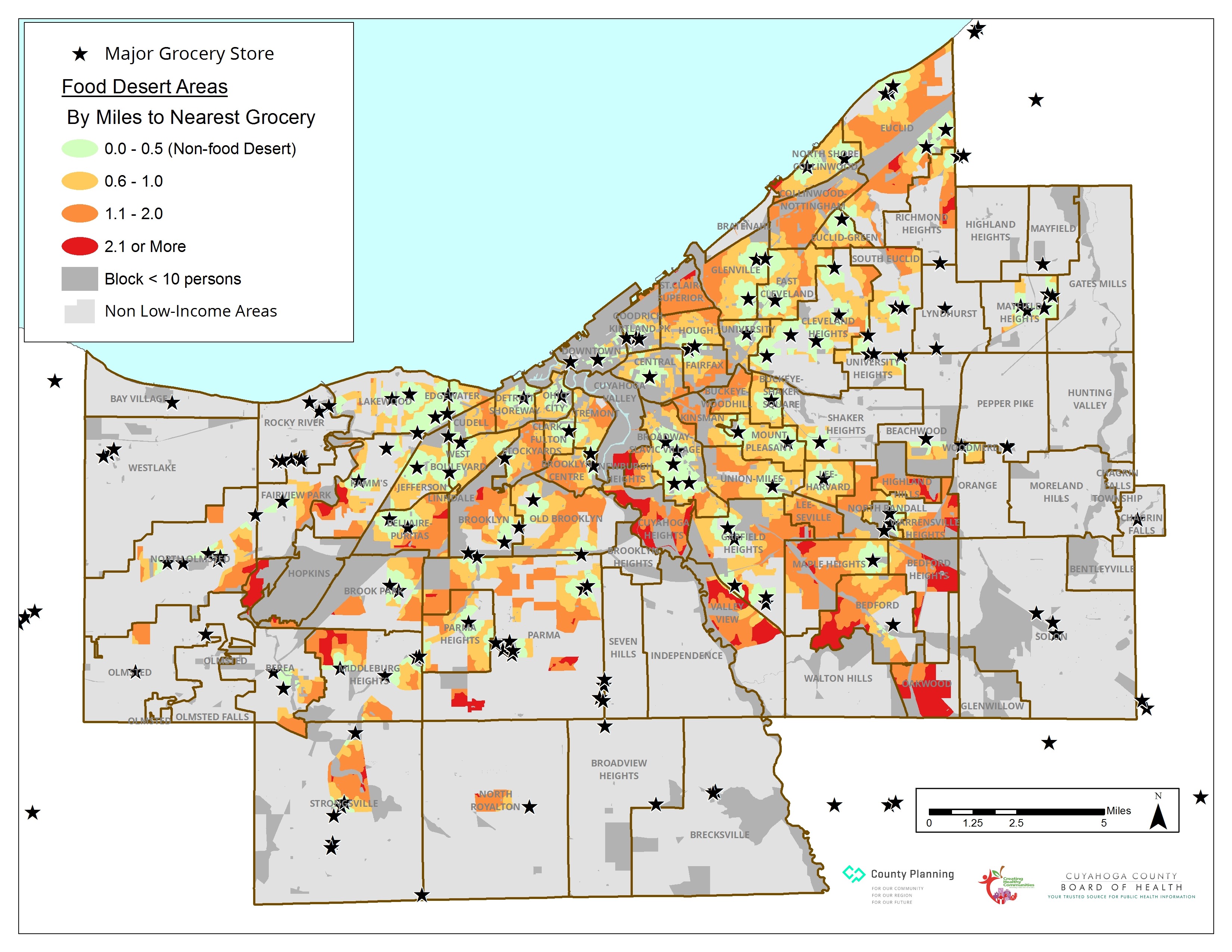 This map shows the distribution of supermarkets across Cuyahoga County.

The areas in yellow, orange and red represent neighborhoods that are more than ½ mile from a supermarket AND are lower income.

The green area around the supermarkets represents a neighborhood with good healthy food access.

Check out the interactive map on the Technical Information tab below.

The Cuyahoga County Planning Commission, together with the CCBH, has been working since 2010 on the Creating Healthy Communities (CHC) grant, which is funded by the Centers for Disease Control and Prevention and administered by the Ohio Department of Health.

From 2016 through 2018, the partners focused their efforts on increasing access to healthy food—especially as provided by full-service grocery stores in low income areas.

The latest report, the Supermarket Assessment 2018 Inventory Update, builds on the most recent work completed by County Planning and CCBH.

As part of our work with the county planning commission, we have an interactive map available which shows the locations of supermarkets throughout the county. By clicking on a location, you will see the name of the retailer and the store address. 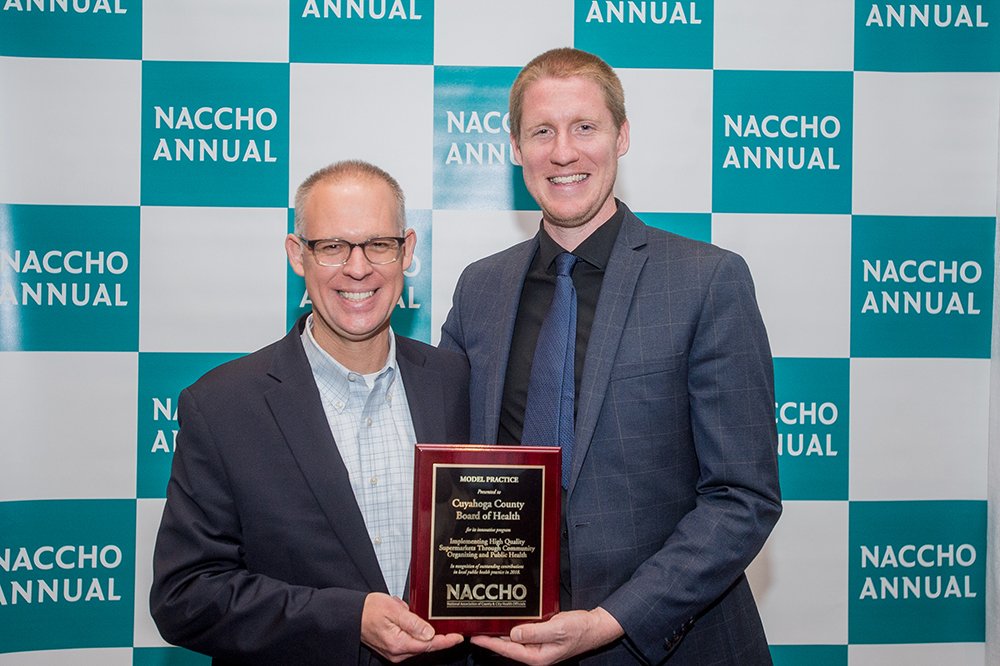 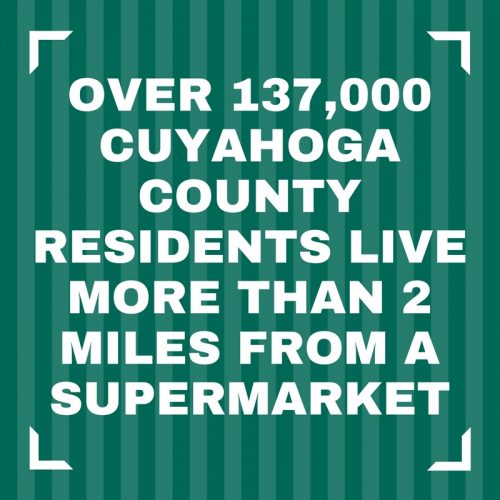 We want supermarkets in our communities

What is a food desert? 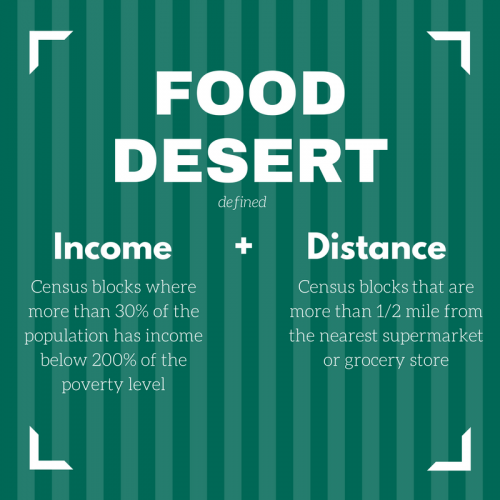 How do I find out if my neighborhood is in a food desert?

Click here to view an interactive map. You can zoom in on your neighborhood and see if it is in a food desert. Certain communities across Cuyahoga County are more challenged than others.

The creators of this assessment have identified “focus areas” or areas where communities are both low income, far away from a supermarket, and compared with chronic disease rates.

Click on the Focus Areas tab for this information.

Where can I get information about my neighborhood?

The Community Profile tabs will take you to a snapshot of each community in Cuyahoga County (either Cleveland neighborhood or suburb). Each Community Profile includes profiles of socioeconomic and demographic characteristics, as well as an inventory of resources related to food availability.

Click here to read a case study about the Simon’s Supermarket implementation in Euclid, Ohio. 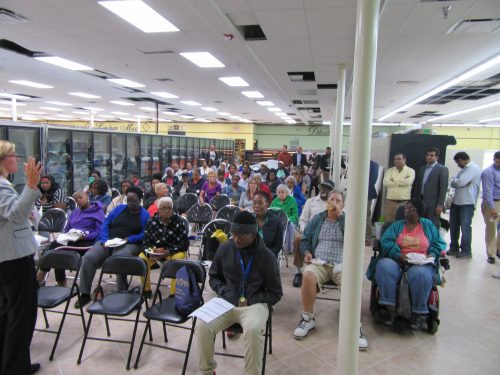 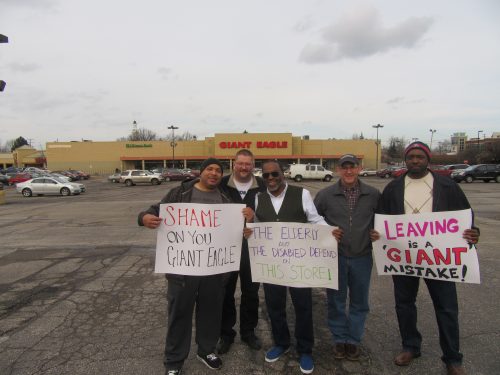 Each project is in a different stage but they all involve collaboration among local government, the store owner and residents to implement a supermarket with input and collective engagement from residents who live near the supermarket.

Supermarkets in your neighborhood can improve your health. 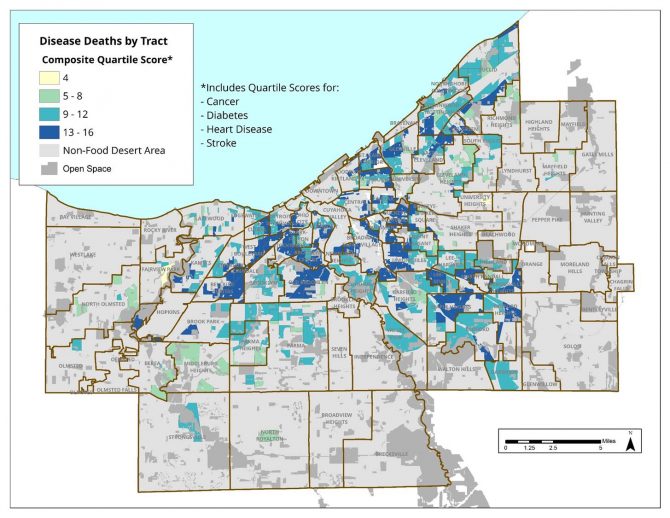 Click on the Focus Areas tab to view some particularly challenged communities with regards to food access and health.

Many studies have shown a link between health and living near a supermarket. In fact, 83% of people living in food deserts in Cuyahoga County are neighborhoods with higher rates of deaths from chronic diseases (cancer, heart disease, stroke, diabetes).

Research About Supermarkets and Health

The Association between Obesity and Urban Food Environments

Supermarkets, Other Food Stores, and Obesity The Atherosclerosis Risk in Communities Study

The Contextual Effect of the Local Food Environment on Residents’ Diets: The Atherosclerosis Risk in Communities Study

Does opening a supermarket in a food desert change the food environment?

Overweight and obesity: Can we reconcile evidence about supermarkets and fast food retailers for public health policy? 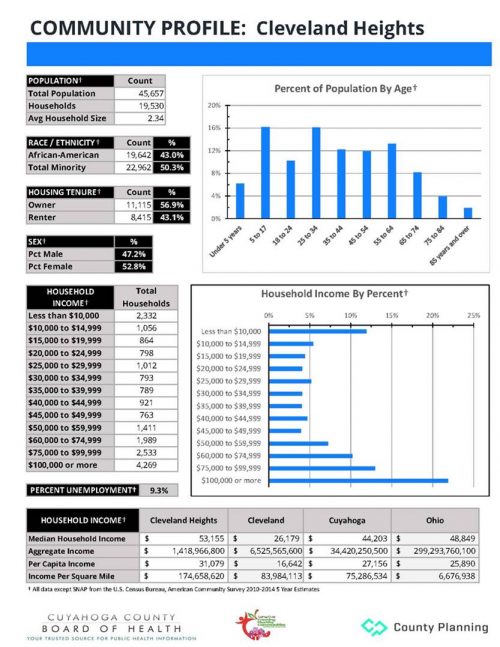 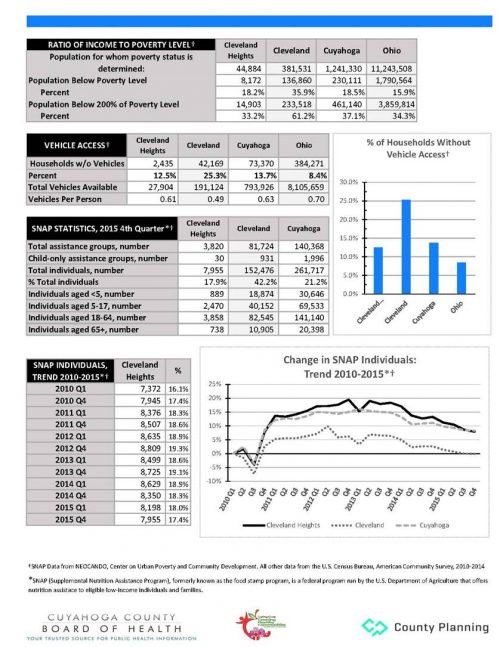 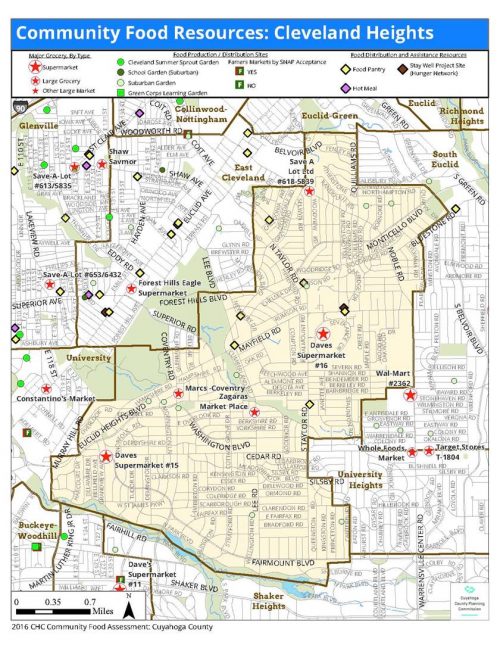 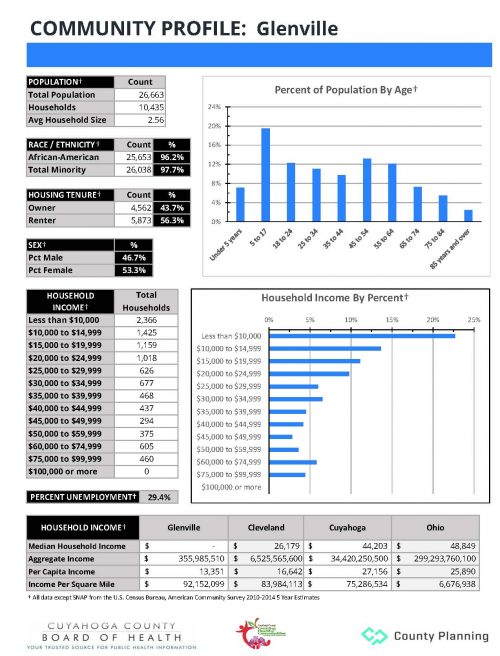 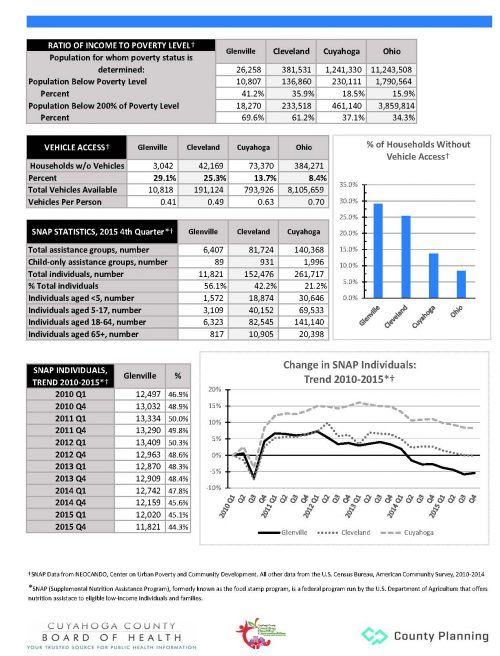 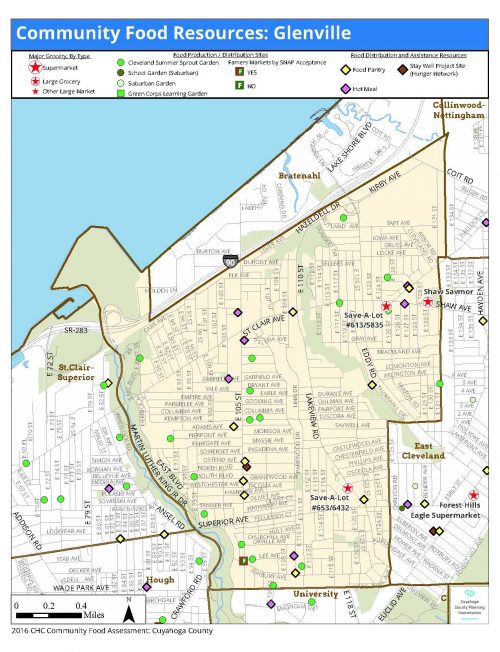 Lucky’s Market, grocer new to Cleveland, lines up for Shoppes on Clifton project (5-13-2015)

After 40 years without a full-scale grocery store, neighborhoods in West Oakland will welcome Community Foods Market (5-1-2018)

Want to Understand Food Insecurity? Talk to the Children Living Through it (4-2-2018)

Can a nonprofit grocer succeed in a Prince George’s city that Safeway left? (2-25-2018)

Food deserts not to blame for growing nutrition gap between rich and poor, study finds (2-15-2018)

To End A Food Desert, These Community Members Opened Their Own Grocery (1-8-2018)

After years of waiting, ground breaks for a grocery store in Vinton County: Ohio Matters (3-20-17)

Join the efforts of the Supermarket Access Stakeholder Group

We plan to track supermarket access in Cuyahoga County and to support supermarket implementation in neighborhoods that are considered food deserts.

Part 1: Current Conditions provides a snapshot of each community in Cuyahoga County, and includes profiles of socioeconomic and demographic characteristics, as well as an inventory of resources related to food availability.

Data was gathered for each Cuyahoga County city, village, and township, and for each Statistical Planning Area within the City of Cleveland, since these communities vary considerably in their demographics, geography, and development patterns. This series of community profiles explores a number of variables associated with food insecurity such as income levels and access to transportation. Most information provided in the profiles was obtained from the U.S. Census Bureau’s American Community Survey (ACS) for the period 2010-2014. Supplemental Nutrition Assistance Program (SNAP) statistics were collected from NEO CANDO (Northeast Ohio Community and Neighborhood Data for Organizing).

The profiles include the following categories:
• Population;
• Race and Ethnicity;
• Housing Tenure;
• Gender;
• Vehicle Access;
• Unemployment;
• Household Income;
• Poverty; and
• SNAP statistics.
For community-level reporting, Census data was obtained at the “Subdivision” and “Place” level. For Cleveland Statistical Planning Areas, Census data was obtained at 11 the block group level, and disaggregated to census block level using proportions of population and households from the 2010 Census, then re-aggregated for each SPA. As a result, median income was not available at the neighborhood level.

Part 2: Resource Analysis is the second step in the study.

The methods for the Part 2 of the Supermarket Assessment included these major steps:

A “Food Desert”, in this study, is defined as any low-income area that is more
than one half mile from a supermarket or large grocery store;
• A “Low-income Area” is defined using the State of Ohio’s eligibility standard for Food Pantry use, and includes households earning less than 200% of the federal poverty guideline. Further, for the purposes of this study, any area where more than 30% of the population earns less than 200% of the poverty guideline is a considered a “low income area”. Just as importantly, those areas that are not low income by this definition will not be considered part of a “food desert”, since it can be assumed that higher income households can readily afford to travel to a store further than one-half mile away; and
• Distance from grocery was determined by travel along the established street network. GIS software was used to delineate concentric “service areas” at ½ mile intervals, from ½ mile to 2 miles from each store. Demographics were
tabulated for each of these service areas and corresponding gap areas to
identify the communities and neighborhoods that would benefit from food
policy interventions.

CALL 211 A community service for social, health and government information